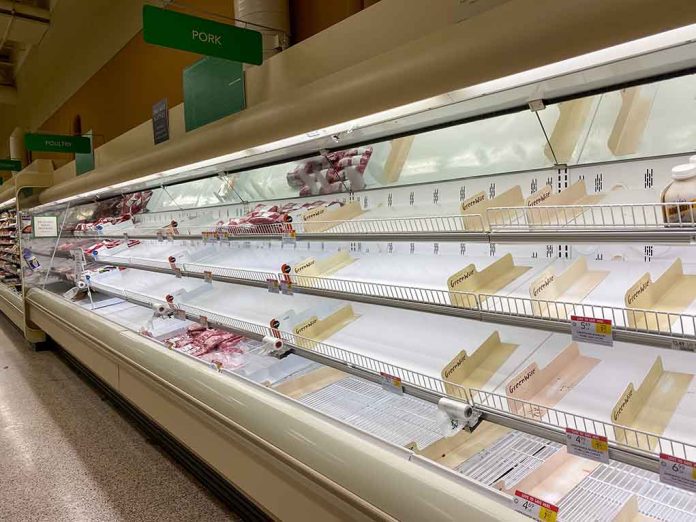 (DailyDig.com) – During a time when the global supply chain is already stressed due to COVID-19 crippling it, the world’s problems seem to keep piling up. Not only is there the potential of Russia unleashing nukes on Ukraine, throwing the world into World War III and possibly a nuclear holocaust, but there are supply shortages everywhere. Next on the list may be food supply issues according to experts.

Fox News reported that President Volodymyr Zelenskyy updated the world on the situation in Ukraine. The Ukrainian President said Russia has control of its southern ports, blocking the country’s ability to perform maritime exports. Zelenskyy asserted if Ukraine can’t take back those ports, it won’t be able to export its grain products, which he claimed could cause a global food shortage. The president said the food shortage would be the second crisis the world endures as it’s currently facing a fuel crisis, which Zelenskyy also blamed on Putin and Russia’s aggression.

Fox News backed the Ukrainian leader’s claims, noting the country, along with Russia, is responsible for producing as much as 30% of the world’s grain supply.

According to the CEO of Gro Intelligence, Sara Menker, the world only has around 10 weeks’ worth of its grain supply left before Russia’s invasion will trigger a food shortage. Gro Intelligence is a company that pairs artificial intelligence with public and private data in an effort to predict trends in the world’s food supply. Menker mentioned that Russia isn’t at fault but did add fuel to the fire.

She also declared that if the world doesn’t take aggressive action soon, there’s a high risk of “an extraordinary amount of human suffering and economic damage.” Menker explained the problem would be “seismic,” claiming that even if Russia withdrew its troops in the next few days, the world would still face a food crisis unless a global effort to avoid that started soon.

Some people in the United States might brush off most of the current issues, citing many don’t hit close enough to home. Even so, America has already had its fair share of food and other supply shortages as a result of the COVID-19 pandemic. To think this global supply shortage won’t eventually hit US shores is borderline foolish.

It may be time to begin stockpiling or planning for the possibility of a food shortage near you.