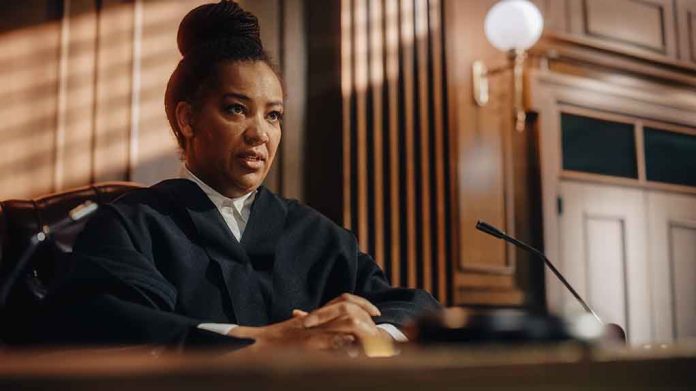 (DailyDig.com) – Alleged associate and partner of disgraced financier Jeffrey Epstein, Ghislaine Maxwell, faced her own trial for her role in the convicted pedophile’s sex trafficking and abuse scheme. Despite the jury finding Maxwell guilty, her defense team wants a second trial after one of the jurors failed to disclose important information. The judge presiding over the case will question the juror and move on from there.

The rare hearing comes as a result of one juror seemingly lying on a questionnaire before Maxwell’s trial. The juror later revealed that they were a victim of sexual abuse as a child. Yet, they failed to disclose that fact on the questionnaire, leading to a potential mistrial.

A federal judge is set to hold a rare hearing to consider whether one of the jurors who convicted Ghislaine Maxwell of sex trafficking was untruthful on a jury-selection form. https://t.co/lVWanGEEVA

Alison J. Nathan, the federal judge presiding over the case, spoke with the unidentified juror on March 8 to determine why the man lied on the questionnaire, which was part of the jury selection process. The revelations have caused Maxwell’s defense to call for a retrial, claiming the first one was held unfairly. The juror admitted to persuading a few of his fellow jurors to find Maxwell guilty.

Juror No. 50, as court papers identify the man, failed to mark “yes” on the question asking whether they or a family member was ever the victim of sexual abuse, harassment or assault, even if it was only attempted. Instead, Juror No. 50 marked “no,” claiming they flew through the questionnaire and missed the crucial question, which was 48th on the form.

Maxwell’s defense has requested an immediate retrial, but Judge Nathan denied them, citing she needs to hear from the juror before making a decision. Prosecutors have mentioned offering Juror No. 50 immunity in exchange for their testimony. The juror’s lawyer asserted he would plead the Fifth without it.

The juror’s failure to disclose their abuse throws a wrench in the gears of Maxwell’s trial as her sentencing is set to take place in June. There is potential for a retrial, which may acquit Maxwell, allowing her to walk free. In other words, the apparent win for Epstein’s victims could quickly turn into a loss.