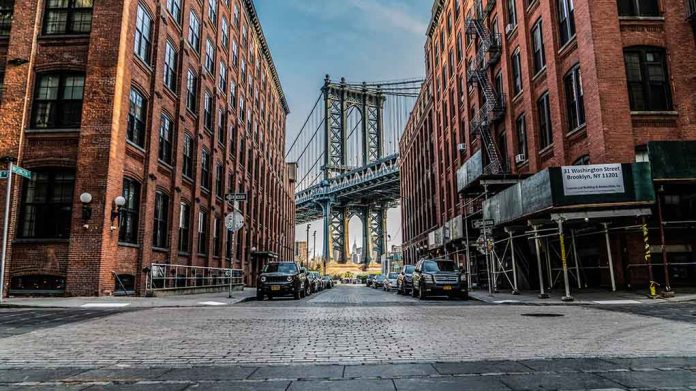 (DailyDig.com) – A gang in Brooklyn beat a conservatively dressed Hasidic Jew on Sunday, making him New York City’s 81st victim of anti-Semitic crimes so far this year. The 21-year-old man was kicked and beaten and suffered minor injuries to the mouth. EMS treated him at the scene.

Warning: The following video may be alarming to some viewers:

WANTED for AN Assault in front of 58 Gerry Street. #Brooklyn @NYPD90pct on 4/1/22 @ 7:55 PM without and prior words or provocation, the individuals punched and kicked the Hasidic victim about the body, forcing him to the ground Reward up to $3500Call 1-800-577-TIPS. CONFIDENTIAL! pic.twitter.com/6W6kfQbU1d

Police arrested a 16-year-old and are on the lookout for the other five suspects. The Anti-Defamation League put a $10,000 reward out for information leading to the arrest and conviction of the remaining suspects. Democrat New York Governor Kathy Hochul said she’s asking the state police Hate Crimes Task Force to look into the issue.

I’m outraged by this act of violence against a Jewish New Yorker. An attack on one of us is an attack on all of us.

I am directing the @nyspolice Hate Crimes Task Force to assist the investigation in any way possible. https://t.co/lFxcGZORTy

The issue seems to go much further than just this incident. The 81 attacks on Jews so far in 2022 dwarfs the numbers from 2021. While the 20 reported instances in 2021 are still far too many by any standards, they don’t compare to what’s currently going on in The Big Apple.

Hate crimes aren’t only limited to New Yorkers. There are increases across the country.  Residents of Haddonfield, New Jersey found this out over the weekend when a local Quaker cemetery fell victim to vandals who spray-painted swastikas on graves. Like New York, New Jersey had a rough 2021; the Garden State has recorded more incidents of bias than ever before.