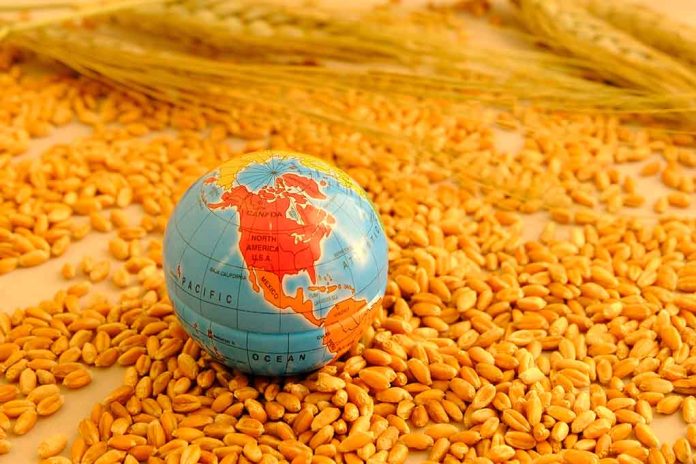 Russia Deploys It’s Most Powerful Weapon Against All The World

(DailyDig.com) – The war in Ukraine has stretched past the 100-day mark. As the battle rages on, it appears Russia is struggling to take key points in the smaller nation, resulting in what many observers would call desperation. As Putin tries to tighten his grip on Ukraine, it seems as though Russia is attempting to use a global food shortage to its advantage.

Russia is weaponizing food supplies to 'blackmail the world' https://t.co/gcJBMEKnAn

Russia has attacked several non-military targets such as schools, theaters, and hospitals. Yet, their most recent airstrike does more than impact Ukraine; it could affect the entire world. Russian forces just destroyed a railcar repair facility in Kyiv, Ukraine’s capital.

Russian intelligence alleged Ukrainians used the facilities as strong points and places to restock and repair damaged equipment. Alexander Kamyshin, the CEO of Ukrainian Railways, countered the claim, declaring there was no such equipment in the area when Russia attacked.

#russians shell railway infrastructure lying that they target military tanks. But there are no military tanks on railway repair factory. Tonight we show to the whole world that #russians lie. pic.twitter.com/QsIbdO5E62

The US Secretary of State Antony Blinken claimed Putin was attempting to blackmail the world, explaining part of Putin’s war strategy was to hold food supplies hostage. Ukraine and Russia are among the top grain producers in the world. The now-demolished factory was allegedly for freight cars that transport goods like iron ore and grain.

Russia has largely blocked Ukraine from exporting grain, and sanctions against itself have also led to halts on exports. With neither country sending out the precious food source, a global shortage may be on the way. Russia likely hopes the fear of such a shortage will drive the West to lift its sanctions, effectively weaponizing food supplies.