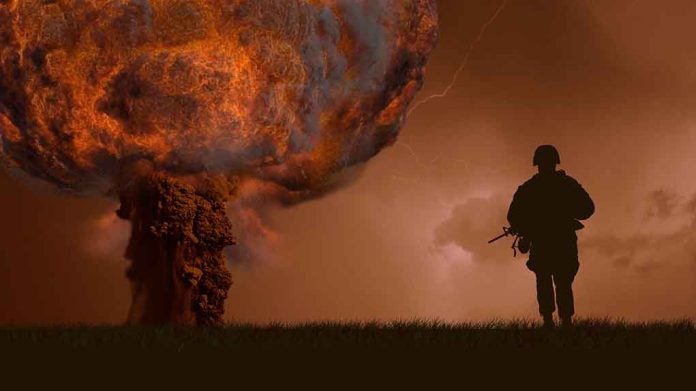 Did Russia’s Foreign Minister Just Say What We Think He Said?

(DailyDig.com) – The war between Russia and Ukraine has escalated tremendously throughout the course of the past two months. Putin hinted at nuclear action near the beginning of his country’s attack. Now, the Russian Foreign Minister is once again warning of the possibility of a third World War, and even the use of nuclear weapons, should the North Atlantic Treaty Organization (NATO) continue to aid Ukraine.

The world leaders fearing that Putin’s actions may escalate into WWIII and potentially nuclear conflict may see them manifest. Sergei Lavrov, Russia’s Foreign Minister, claimed NATO has escalated this conflict by proxy before warning of the use of nuclear weapons. The Wall Street Journal reported that Lavrov accused NATO of escalating the war by supplying weapons to Ukraine, claiming the treaty’s members were legitimate targets.

Lavrov mentioned that no one wants a third World War and that it shouldn’t be allowed to happen, admitting even Russia wants to avoid it. However, the foreign minister did mention that this threat should be taken seriously, again adding that nuclear strikes are not off the table for Russia.

Many world leaders expressed concern that if Putin became desperate enough, he may employ the use of tactical nukes. Dmytro Kuleba, Foreign Minister of Ukraine, took to Twitter to express his feelings about Russia’s threat, claiming they are just scare tactics and a sign of Russia’s failure to overtake his country.

Regardless of the reason, Lavrov is right. No country wants to fight in a third World War, and certainly no country wants to get into a nuclear conflict. Is the Russian threat real? Would Putin really hit the “big red button” if he became desperate enough? Let’s all hope not.