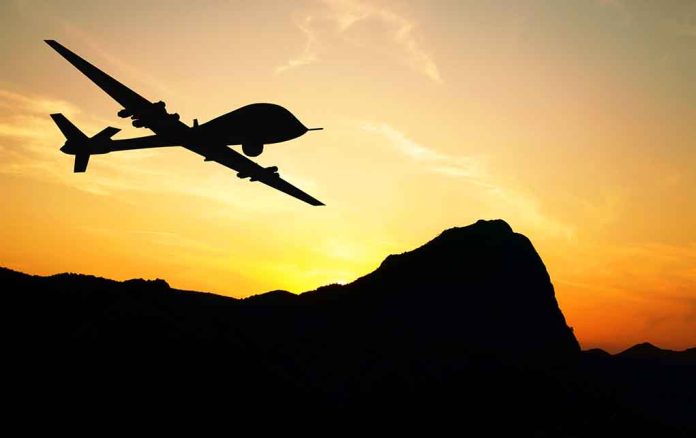 (DailyDig.com) – In September 2022, Russia employed Iranian drones in Ukraine. They used the drones to hit multiple Ukrainian cities, confirming fears that Iran’s drones were going to Russia for war. Iran’s support of Russia have shown their strategy to advance its leadership’s national interests.

Iranian-made drones shocked the West. Iran’s operatives in Yemen, the Houthis, have allowed Iran to test weaponry against Gulf nations’ strong air defense systems. Iran helped Yemen’s Houthis’ northern takeover. They gave battle intelligence on Iran’s drone and missile systems, the foundation of its military strategy, thanks to their proximity to Saudi Arabia.

In late 2016, the Houthis used Iranian suicide drones to attack Saudi Arabia. The group has improved this drone type range and accuracy using Iranian innovations. After an Iranian strike on Saudi energy installations in 2019, drones debuted and the Houthis displayed them in Hudaydah.

Drones are often used to target people. They can only hit stationary objects using GPS coordinates. They assaulted various Saudi military targets, which are more protected than communities and found resistance. Civilian targets are terrorist assaults which demoralize the enemy and bring the war to the people.

Iran learned to bypass modern defenses in Yemen. The Houthis used Iranian-developed rockets and drones in Yemen. Now, the Houthis and Russia can overwhelm the enemy’s defenses by employing a huge number of missiles with diverse flight trajectories. With talk that Iran is giving these to Russia, they may be trying to replicate this strategy.

Tolerating the Houthis and Iran’s drone capabilities have consequences. The Russian invasion of Ukraine merged unconnected conflicts and increased the burden of past mistakes. US partisanship and a lack of Yemen coverage partly explain the West’s reaction to the Houthis’ superior armament. Removing the Houthi’s Foreign Terrorist Organization status was a mistake. They should be sanctioned since they failed to extend a truce this year and contributed to Iran’s dangerous armament development.