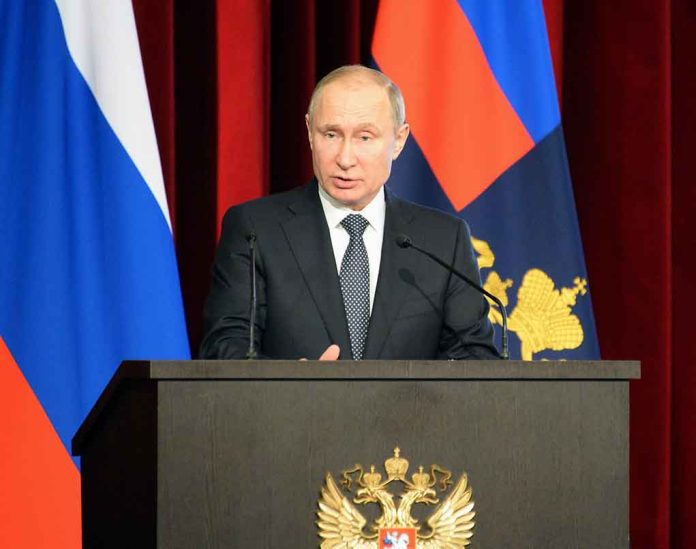 (DailyDig.com) – The situation in Eastern Europe only appears to be getting worse. It’s the job of a leader to address their followers and constituents during times of stress. Russian President Vladimir Putin recently gave a speech regarding the ongoing situation on Russia’s border with Ukraine, hinting at a new world order.

On February 21, President Putin spoke for nearly an hour, covering grievances that have built up for years and issued what was almost a certain challenge to the post-Cold War era. The Russian leader’s speech recognized the independence of two parts of Ukraine that broke from their parent country after Russia took them in 2014. According to his speech, Putin believes Ukraine was an accident that Western governments, namely the United States, want to use as a forward operating base to launch missiles.

Putin’s combative address from the Kremlin Monday was a nearly hourlong recitation of decades worth of historical grievances and an unmistakable challenge by Moscow to the post-Cold War international order dominated by the West https://t.co/XvhBNRCM4N

Putin asserted that Ukraine was once a part of Russia, but the breakup of the USSR saw Ukraine’s formation, ignoring historical ties to its motherland. The Russian President accused external influences of encouraging Ukraine to separate itself from Russia. Putin declared that Ukraine has become a nation of puppets, claiming it wasted everything it inherited from the Russian Empire and the USSR. In Putin’s eyes, Ukraine should be a part of Russia because it used to be.

Ukrainian philosopher and editor Volodymyr Yermolenko believes Putin thinks the world should go back to being full of empires with spheres of influence. Yermolenko noted that Putin is logical in a sense but that his ideology is dangerous, claiming it asserts nation states, where human lives don’t matter.

Is this what Putin wants? To restore the Russian Empire or perhaps the Soviet Union? Or does he have a different perspective of a new world order?