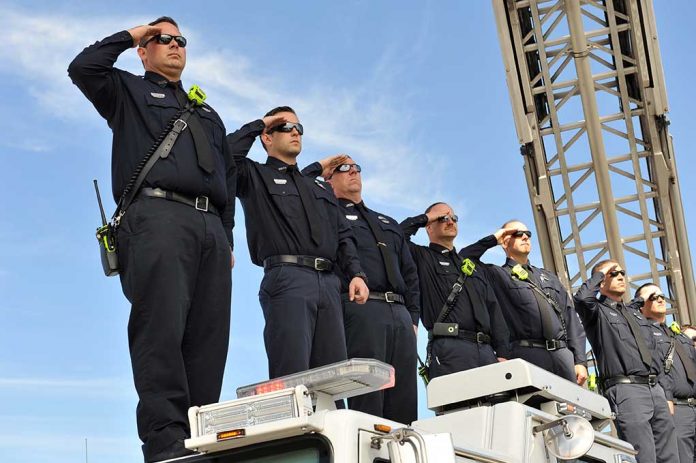 (DailyDig.com) – President Trump, two days before his departure of the White House, signed Executive Order (EO) 13977, which enhanced the protection defined by the Law Enforcement Officers Safety Act of 2004. Trump has long expressed his support for citizens who uphold the law in our country, and he proves this by his actions in office. Let’s go into some detail as to what brought the idea for this EO to manifest.

In July 2020, a man dressed as a FedEx driver attacked the family of US District Court Judge Esther Salas. The assailant, a men’s rights attorney with a grudge, shot and killed Salas’ only son, 20-year-old Daniel Anderl. The gunman also shot and seriously wounded her husband, Mark Anderl, who was taken to the hospital in critical condition but thankfully recovered. The Executive Order references this tragedy as being part of the reason behind it.

What the EO Does

It’s no surprise these types of attacks happen. Public servants need to be able to protect themselves no matter where they are; we certainly know criminals don’t care about “gun-free” zones. Executive Order 13977 breaks the barriers in place that keep both active and retired law enforcement officers (LEOs) from conceal carrying firearms.

Any agency employing qualified LEOs is required to submit a report to the president. Any barriers facing the conceal carry of firearms by LEOs must be identified and explained why they weren’t removed before the executive order was put into effect. These agencies and departments must also prove that they’re taking the necessary steps to implement the policy in the future.

Federal prosecutors may undergo deputation by US marshals, which allows them to carry concealed firearms, despite any current state or federal regulations, if they or their families are threatened. The order goes on to detail that federal judges, along with their families, are able to carry concealed firearms to protect themselves despite any state or federal laws prohibiting the practice.

The deputation of prosecutors only allows them to carry concealed firearms and does not grant them the right to make arrests. Deputized prosecutors are required to undergo firearm safety training and instruction on how to properly operate firearms, as detailed by the EO.

Secretary of homeland security and the attorney general are required to assess the feasibility of minimizing or removing personal information in regard to active and retired LEOs, judges and prosecutors in cooperation with the executive branch. After review, any person deemed “at risk” will be notified.

The heads of all agencies are also required to review what information they collect from prosecutors, LEOs and judges by the EO; these agencies must allow for the use of a PO box rather than a home address for official purposes. The Department of Homeland Security (DHS), the Federal Bureau of Investigation (FBI) and the US Marshals Service are all granted greater authority and appropriations in response to civil unrest and threats to federal courthouses.

Donald Trump believes in law and order; he cares for those who serve and protect the American people. That’s why this EO was so important to him, so he could better protect federal judges, prosecutors and LEOs, both active and retired. It’s unfortunate that these people are targeted for simply doing their jobs, but it is the reality of their career. Thankfully, someone is looking out for them.