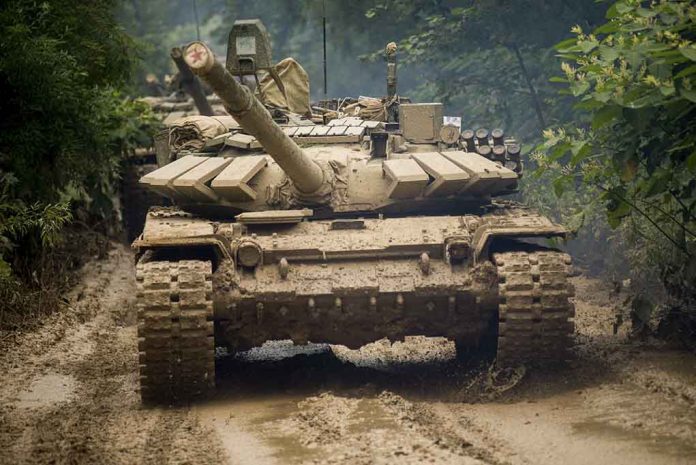 (DailyDig.com) – Russia’s invasion of Ukraine is close to entering its third month, but the fighting is far from over. While Russia’s forces are much better-equipped, Ukraine has proven to be a worthy adversary. Now, Ukrainian forces are looking to even the playing field by repairing Russian equipment to use against Putin’s invading army.

In Eastern Ukraine, the city of Kharkiv has been one of the heaviest hit by Russian forces. Yet, there are six mechanics doing what they can to turn the odds in their favor. The New York Times shared that these mechanics are utilizing a warehouse to repair Russian tanks and weapons. The report noted several Ukrainian vehicles were also undergoing repairs in the warehouse.

According to NYT, Ukrainians are salvaging any usable parts while also searching vehicles for information. One mechanic, who wished to stay anonymous, said, “This is where we bring the Russian tanks we pulled from the bogs, fix them up, and use them against the Russians.” Another mechanic started up a tank, testing to make sure it was operational before sending it back out for redeployment.

While Russia has struggled to overtake major objectives in Ukraine, its woes have seemingly only increased as more Ukrainian forces have trained citizens to fight. Business Insider reported the practice has been taking place in Ukraine since January of this year. It’s become a common sight to see soldiers training civilians with wooden AK-47s. On top of teaching their people how to properly handle weapons, Ukrainian forces are also showing civilians combat tactics.

Ukraine’s decision to employ civilians as tools of war was not likely an easy one. However, it’s a trend that’s recurred throughout history, even in the United States. After all, that’s how the country liberated itself from England. When an outside force threatens a person’s home, they do whatever it takes to protect their assets and family.

Is the End Nigh?

According to the report from the Times, Ukrainian President Volodymyr Zelenskyy asserted his government was doing everything it could to get citizens to safety, citing there was still “a large number of people” in danger. Meanwhile, Ukraine’s second-largest city, Kharkiv, has seen some Russian forces withdrawing, according to Business Insider.

Could the move be a sign of this conflict coming to an end? Ukrainian Minister of Defense Oleskii Reznikov doesn’t seem to think so, claiming Ukraine is gearing up for the possibility of a long-term war with Russia.